Starting off a new series of super brief reviews/comments on games, books, and other stuff that I own or recently obtained. Today we’re going with Hylics, a great looking RPG Maker game, and Time of Need, one of my favorite critical books on art (yeah, yeah).

I won’t get super into Hylics right now, but I wanna say that the game looks and sounds fantastic. Mason Lindroth’s claymation/low-res artwork is fascinating to watch squirm around, and rarely are you even reminded that everything in boxed into RPG Maker tiles. It’s a testament to how far RPG Maker’s open endedness can lead to great things. The sound design is equally impressive, and definitely recalls Space Funeral’s use of Les Rallizes Denudes with its distorted, experimental guitar hums.

Hylics has something to say about Gnosticism, and while you don’t really get punched in the face by its gnostic hell world like in, say, Dark Souls, the use of real textures, bodies, and the motif of skin and transformation makes for a trippy adventure down transgression lane. It’s a short game, about two hours, though much of the length comes from how damn difficult the game is. The JRPG turn-based battles give you a decent amount of options, but players’ll probably find themselves dying frequently to the same enemies.

The writing is random to the point where it might be superfluous, and goofy NPC text is all over the place. I kept hoping that NPCs would start giving me puzzles clues or something, but that never really happened. There weren’t any lines of dialogue that stood out to me, but the writing should be taken with a grain of salt. Hylics is decidedly a game of beauty and aesthetic. Worth the couple bucks it costs. 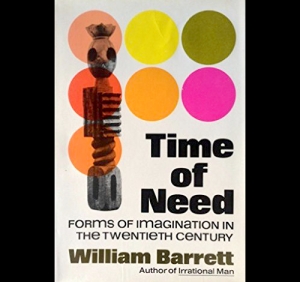 I originally read this book when I was in high school because modernism freaked me out and William Barrett seemed to back up my notion that art of the 20th century was apocalyptic and that modernism was a problem that needed attention. Now that I’m old and boring, I know that Barrett’s not really saying anything radical, that he’s interested in sentence structures and telling it like it is about Camus and Nietzsche. It’s a fantastic read for kids interested in the development of atonality and Faulkner.

“Confronted by a world that has become meaningless, we cannot be convinced by rational arguments to finding meaning in it. But if life-giving energy flows we are able to create values, and we can then find reasons enough to find the world meaningful…Humor is a sign of vitality. So long as we can still laugh, we have not succumbed to despair.”

There’s a section on sculpture throughout history, comparing how men of different ages choose to portray man through art. I also like the cover ~

Combination of Murder in the Cathedral if it took place in Dark Souls, the opening segment of EarthBound mixed with Les Chants des Maldoror, Scooby-Doo cantos by Baudelaire, Space Funeral if penned by Pierre Klossowski, rotting away in Irondequiot, New York – if I can live up to this “fucking shit,” I’ll, uh, I dunno, buy myself a Sega Dreamcast. – nilson May 4, 2016 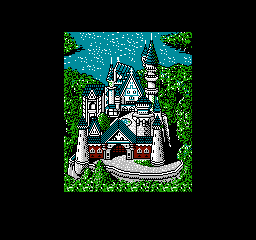 had a dream me and tetts were winning the super bowl

In my early days of gaming, I was a pretty hardcore Nintendo fan.

It wasn’t until years after the Nintendo 64 came out that we bought a Sega Genesis (Toys R Us was still selling new ones at the time, and I remember the day vividly).

Along with the console, we bought two cartridges, a Sega collection cart with Golden Axe and Columns, the Sega Genesis 6-Pak, I believe, and Castlevania: Bloodlines (1994).

The Sega Genesis, or Mega Drive, seemed like a much more mature console than the SNES or NES, as all the games I encountered (Golden Axe, Bloodlines, Columns, and later, the Phantasy Star games) had these unappealing, more realistic visuals that differed greatly from their Nintendo counterparts. Even bright and stylish Sonic games were less appealing and had a more mature visual style than the early Mario games.

Columns is the focus of this article, and my experience with it.

END_OF_DOCUMENT_TOKEN_TO_BE_REPLACED

Half up the arcade stairs,
the old heavy blue halo
crunching down on us,
earthquake roar, hurtle,
hurricane, heads up,
you speak in tongues on
a cartoon RPG religion.
Our feet stuck to wooden
planks, I set my fishbowl
drink down, sloshing pink
sludge, and repeat after
you three small mantras:
rhythm, respect, and
play.

That’s a name I hadn’t heard in almost a decade.

Wall Street Kid is a game I had when I was very young, one of those used three bucks NES cartridges kids buy because the picture looks mildly entertaining (or just because we couldn’t believe there was a game about being a “wall street kid”). It was a game my brother and I would play very rarely, and only for ten minutes at a time, one of the games that seems like it might be funny to play for a bit, then quickly becomes too tedious to be novel.

It’s one of the few old games I never returned to as I got older, looked at it with new perspective. Would it charming, humorous, or just awful? Would it be worthy of my kind of “weird NES game” seal of approval?

The game was developed by SOFEL, a Japanese communications company that dabbled in Famicom and apparently Game Boy games before fading into obscurity. Their first title, Casino Kid (or $1,000,000 Kid: Maboroshi no Teiou Hen), which is based on an unpopular manga, was released in 1989, with a sequel, Casino Kid II, released in 1993. The sequel was a very late NES game, but rumor has it the game was supposed to be released in 1990 and titled The Prince of Othello…!

The games were obviously shoddy casino simulators, but had cool “JRPG walking around” segments, which I’m a sucker for. Mediocre sprites, but still cool. The garish checkered floor is to die for.

The US Wall Street Kid was released in Japan as The Money Game II: Kabutochou no Kiseki, and it was a sequel to SOFEL’s earlier game, The Money Game. The game’s scant Wikipedia article has this to say:
END_OF_DOCUMENT_TOKEN_TO_BE_REPLACED

Monster Party was released for the NES by Bandai in 1989 in the US, developed by Human Entertainment (of Kabuki Quantum Fighter fame, maybe). For whatever reason, Bandai never released the game in Japan, and this only adds to the obscurity and mystery surrounding the game.

Monster Party isn’t like most other NES games. It holds something of a cult status among retro gamers and collectors, both due to the game’s mysterious history and for its…aesthetic. While remaining in its average NES platformer obscurity, Monster Party saw a rise in its cult status after a series of Japanese Famicom prototype screenshots surfaced in the early 2000s on the internet.

Let this be said first: Monster Party is a very strange game, a creepy, mystical video game. It’s tough to gauge how popular the game was initially (apparently it received a 6.25/10 from Nintendo Power), and I can’t comment on how the game would be remembered if the prototype screenshots never showed up, but I can say this much: the few, grainy Japanese images revealed that Monster Party was originally much darker, bloodier, visually complex, and more pop culturally-oriented than the already completely strange game we played when we were younger.

END_OF_DOCUMENT_TOKEN_TO_BE_REPLACED

Someone on a game forum recommended this to me and I hadn’t heard of it, so I wasn’t sure at first why he recommended it. The topic of discussion was frustrating SNES games, but there are frustrating games that are difficult but satisfying, there are overly obscure games, unforgiving games, and sometimes games with just awful design. Which one was Jim Power?

Jim Power: The Lost Dimension in 3-D is I guess a misleading title. It recalls to mind something like beloved The Lost Vikings (1992) or Virtual Bart (1994), video game narratives that feature time travel or virtual realities, narratives that have no rules. Jim Power promises 3D, as well, whatever that could mean on the SNES (Star Fox?).

The game was developed by French developer Loriceil, who came out with a handful of Commodore 64 and MS-DOS games in the 1980s that probably not a lot of people have ever heard of and a few hits like Golden Eagle (1991) on MS-DOS. Eric Chahi, who later designed Another World (1991) had his start at Loriceil, so the studio isn’t too obscure.

In 1992, the studio came out with what seems to be their biggest hit, Jim Power in Mutant Planet, which was co-developed by Digital Concept, and features music from the incredibly talented Chris Hülsbeck, who worked on the Amiga/C64 version of R-Type and sci-fi run and gun Turrican (1990). A year later, The Lost Dimension in 3-D would be released.

Wikipedia seems to go to great lengths to make sure its readers are aware that Lost Dimension is not a sequel to Mutant Planet. The two have the same first level, though Mutant Planet looks, sounds, and maybe plays much better. Hülsbeck’s music can be heard in Lost Dimension, but it gets a bit garbled in the translation, though I might be biased. The first level’s theme is my favorite, and it’s pretty rockin’.

Both games have a striking resemblance to Turrican, both in terms of gameplay and sound. It’s funny to think that Loriceil wanted to make a Turrican-clone and actually went out of their way to get Hülsbeck to do the sound, but I’m just speculating.

According to this, publisher Electro Brain actually packaged stereoscopic Nuoptix 3D glasses with the game, which would make the parallax scrolling backgrounds appear 3Dish. I can’t even imagine this. I felt so sick after playing it for about three hours and went straight to bed.

END_OF_DOCUMENT_TOKEN_TO_BE_REPLACED

Tonya Chocolate Lunch Time raises her glass, a toast to never having to sexualize her children on film and to the day’s spoils, rotten and gold. The rest of her party, the clerk, the cleric, and three princess chiefs, agree and agree around the Holy Saint Weed Plant that burns real slow in the pyre.

Bloodcruze
Create a free website or blog at WordPress.com.